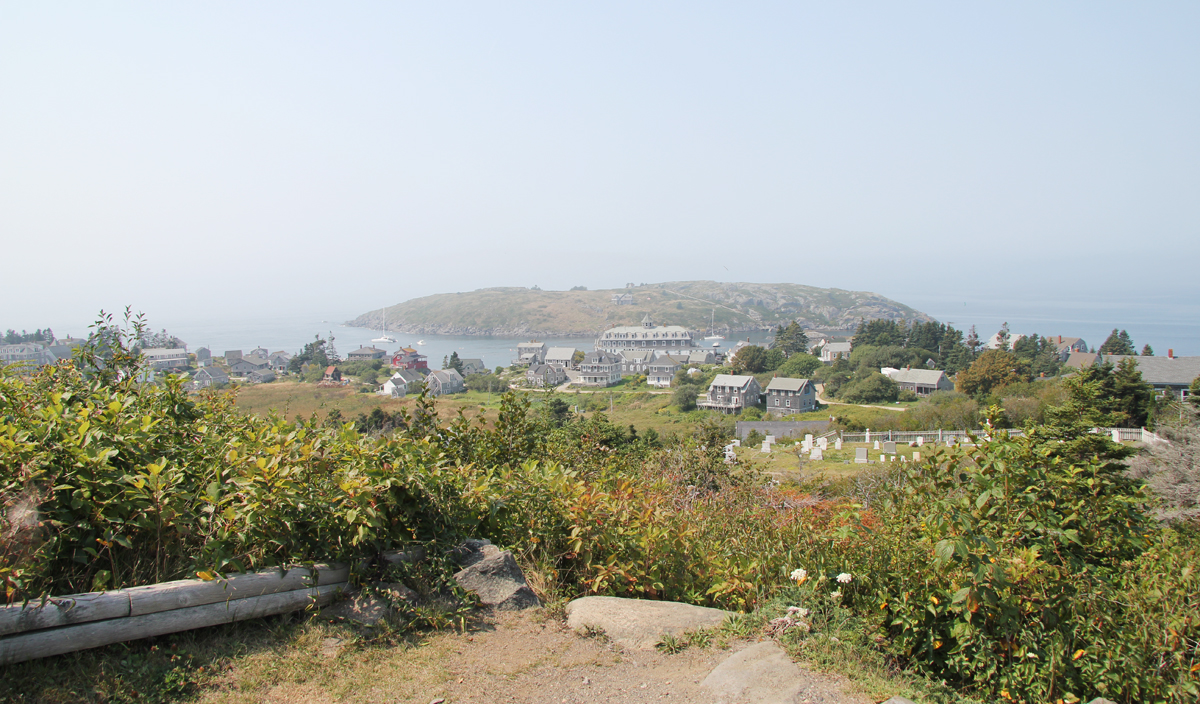 Low tide. The ocean recedes, revealing a landscape that is usually hidden underwater—sea moss-covered rocks, their texture like velvet, brown and bright green and yellow. Later this evening, when the tide rolls back in, the water will overtake them, leaving just the ancient gray granite above the surf, stacked high, unmoved, unchanged, for centuries.

This morning, the lobster boats idle in the distance, swinging out into arcs, than stopping. Whether they’re collecting their traps or setting new ones, I can’t tell. Brightly colored buoys are scattered everywhere in this cove, like sprinkles.

This morning, the lobster boats idle in the distance, swinging out into arcs, than stopping. Whether they’re collecting their traps or setting new ones, I can’t tell. Brightly colored buoys are scattered everywhere in this cove, like sprinkles. Every color and combination you can imagine—green with white, yellow and red, blue, neon green. Some are so close to the shoreline now, in low tide, I wonder if I could walk out onto the rocks to inspect how far the ropes extend down deep into the surprisingly clear water.

“Maine has the highest number of elderly people per capita,” the retired judge from Houston told us yesterday. After they offered, we joined them at their picnic table in the shade. We were surprised to hear they were from Austin, and we talked more commonalities—sports, the first Longhorns game of the season this weekend, hating Interstate 35.

We sipped on our sampler flight of four beers outside the Monhegan Brewery, deciding which one was our favorite. I preferred the pale-colored Kölsch and Jacob’s was the black IPA. I’d also ordered a small glass of their house ginger beer, which was my favorite out of them all. The taste of it was spicy and cool and refreshing, perfect after the rocking hour-long boat ride and the long hike we’d taken along the island’s east coast.

We woke up early that morning to catch the 9 a.m. ferry. The ferry runs twice a day out of New Harbor, once in the morning and again in the afternoon, making it a perfect day trip—five hours to explore the island, which is just enough to walk from one end to the other. When we left, a heavy blanket of fog covered the harbor and I assured myself surely it would burn off when the sun got hot in the afternoon.

We got to the ferry early enough to choose a seat on the top deck with a view. A handful of other people were already there, like a couple that sat in the very back with their wire fox terrier. All of the wooden-bench seats eventually filled up—elderly couples with broad-rimmed hats and compression stockings, a group of four rowdy tourists about our parents’ age, and two couples that looked to be our age, or younger.

I snapped a few pictures over the guard rail, looking out into the harbor. The fog erased the horizon line, so the scene was otherworldly—bright white and yellow light, the water a mirror; a few lobster boats anchored into the water. 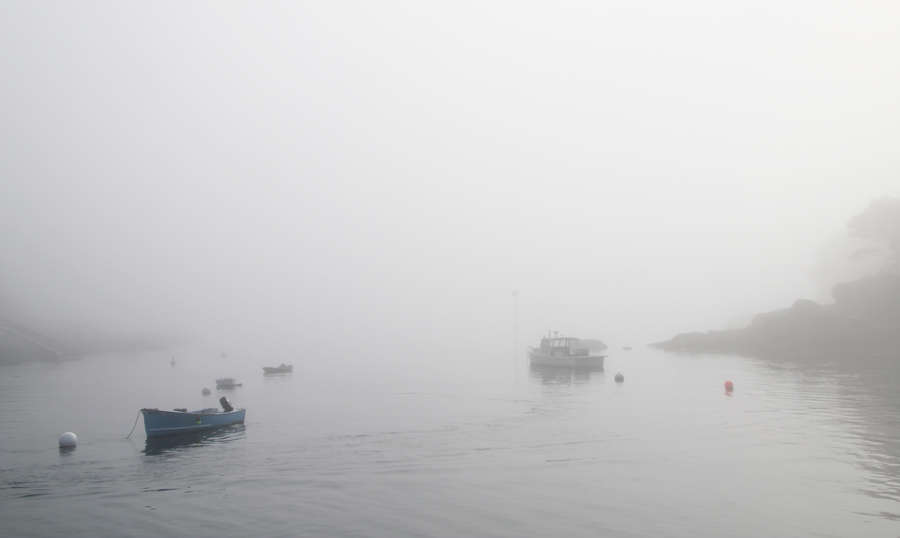 The fog erased the horizon line, so the scene was otherworldly—bright white and yellow light, the water a mirror; a few lobster boats anchored into the water.

The hour-long trip to Monhegan was shrouded in fog; it never let up. Visibility was limited to a few feet beyond the boat’s sides, so you could make out the rippled surface of the water, and our wake. I kept my eyes closed to avoid getting sick, just letting myself feel the motion of the boat moving across the water, back and forth, sometimes forward and backward. When I did open my eyes, it really was a beautiful, mysterious scene: the bright light diffusing through a fine mist of tiny water particles, dispersed through the air.

The couple in the seat ahead of us soothed their crying baby and someone behind us wondered out loud “shouldn’t the gentle rocking help?”

We landed on Monhegan Island in a little over an hour’s time. I was sad to miss the view of the island as we arrived, since the fog obscured everything. Once we got off the boat, visibility increased, and you could make out the inns and shops and houses—and the immediate feeling of history: upright wooden-shingled colonial houses, brightly-colored front doors, stained brick chimneys. 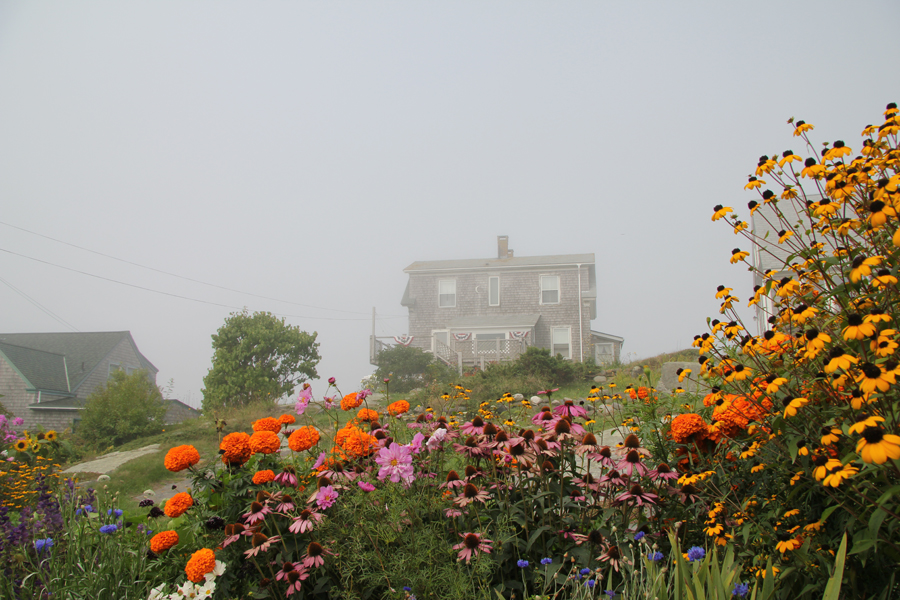 I brought one of my Maine guide books and circled the places on the Monhegan Island map it mentioned: follow the Burnt Head trail, then turn north on the Cliff Trail to Squeaker Cove, then head back west through the Cathedral Woods, back to the village. A short walk (and a few wrong turns) lead us to the first sign, so we set off.

What we found was awe-striking: a hike through a dense forest that eventually led up and over rocks to five separate panoramic views of the cliffs and the ocean. “It’s like something out of a movie,” Jacob said. “I just can’t believe we’re on an island.” We took a few minutes to sit down on the rocks overlooking one of the cliffs. A man in a brightly-colored orange shirt sat on the rocks in the distance, the only foreign color in the scene.

The sound of the surf roared down below, crashing on the rocks. I remembered something the guide book had mentioned: this is were you keep a healthy respect for the ocean.

The fog hadn’t completely cleared, so you didn’t get a complete view of the ocean’s horizon line, but it was enough to see the jagged outline of the cliffs and the pine trees clustered at the top. The sound of the surf roared down below, crashing on the rocks. I remembered something the guide book had mentioned: this is were you keep a healthy respect for the ocean.

We hiked on, doing our best to follow the illustrated map—climbing sometimes vertically over rocks, then down steep ledges to continue on the trail. We passed a few other hikers—groups of elderly people with hats and belted shorts and walking sticks. “If they can make it, we can,” Jacob joked. I laughed, out of breath. 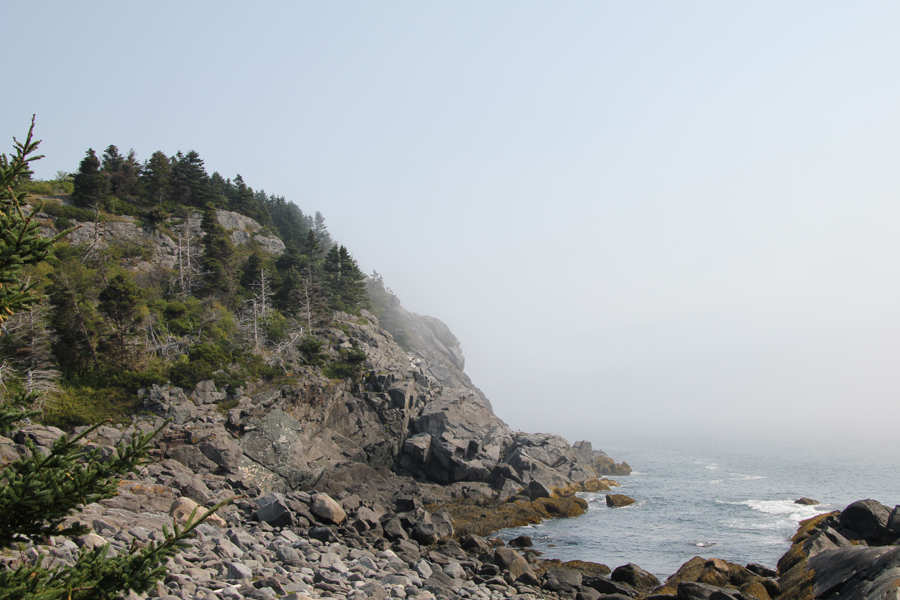 The last part of the trail heads through the Cathedral Woods, a thick, shady forest that runs through the interior of the island. I wondered how a complicated landscape ended up on an island, which seems like an abbreviated version of the mainland—but Monhegan boasted all the complexities of a rich geography, and the forest seemed to mark it’s own legitimacy, in case you had any doubts. It was cool in the forest, and I could understand its namesake—the cathedral of tall trees overhead; a sacred place all in its own. 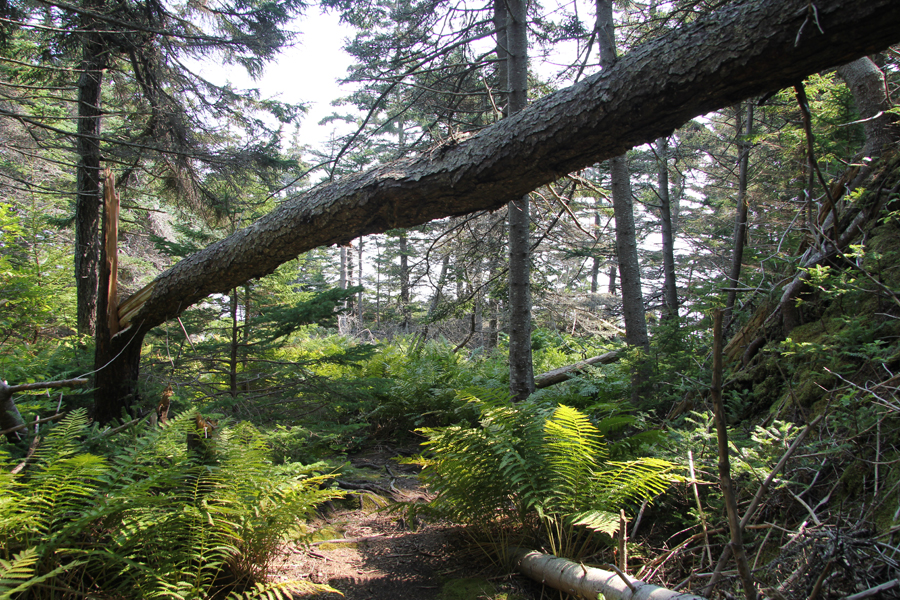 After two hours of hiking, we were hungry. I’d packed the same picnic lunch as I have every day this week—sandwiches, crackers, hummus, cookies, the added treat of a brown-spotted banana. We hiked up the hill to the lighthouse and found a bench overlooking the island. From the spot, you could see Manana Island off in the distance, a cemetery with white headstones, the cluster of rooftops in the village center.

I stopped to snap a few pictures of the man painting a small canvas on his portable easel. He stood with his back to the path, working paint with a tiny detail brush. I imagined what it would be like up here, painting, an audience of passing tourists that stop and watch you work, appreciating your efforts to capture the scene.

We left Monhegan content, tired, a little sunburned, and full of beer. Jacob ate an ice cream cone on the walk down to the ferry and I took a few licks; it was melting quickly in the afternoon sunlight. The fog did eventually burn off, enough for us to get the view of the island as we left and headed back out to sea.

On the ride back, we spotted seals and porpoises and everyone cheered and clapped as sightings were announced. I didn’t close my eyes this time: I wanted to remember it all, take it all in, this day spent on the island out-to-sea. 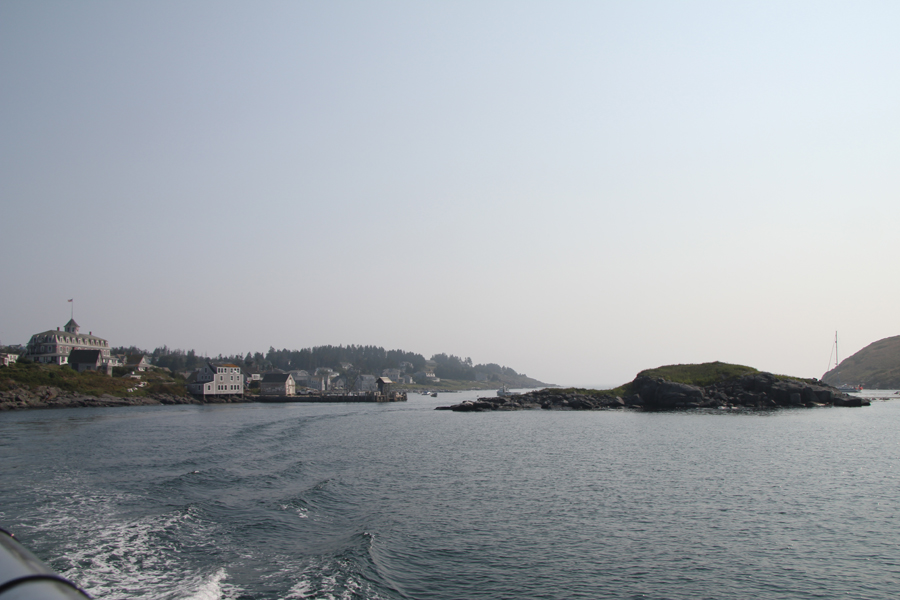